Case study: how you can transform your insurance profile

Case study: how you can transform your insurance profile 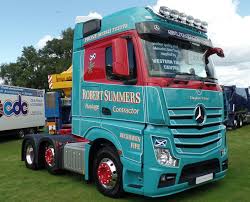 We know that good use of telematics can change a business’ fleet performance for the better. Equally, it can be hard for a business to imagine the improvements when they haven’t experienced them for themselves.  That’s why we wanted to show you the difference that good use of FLEETiQmade to one of our customers.

Robert Summers Transport Ltd are a family owned company which has been in business since 1970. When we started working with them they already had an excellent reputation for delivering a high quality, total transport service.

QBE asked us to make our services available to Robert Summers Transport as there were numerous small claims on their profile. This was giving them cause for concern. There was evidence to suggest that the culture that had developed amongst drivers was leading to accidents and increasing the level of claims against the company.

There were concerns that drivers were habitually speeding and driving in a way that was might be deemed unsafe and inefficient. We knew that FLEETiQ could help. Firstly, it could help to identify the behaviours that needed to change and develop a plan to make that happen. Secondly, once the plan had been implemented its data collection tools would allow us to track the progress being made.  We needed to change the culture, reduce endemic speeding and promote safer driving.

We knew that changing the culture amongst drivers wouldn’t happen without a clear plan. Initially, we worked with Robert Summers Transport to develop a partnership that would enable them to lead change with our support.  We don’t believe in supplying a tool then leaving our customers to get on with it, which is why we offer project management support alongside a whole range of other tools.

The next step was to find out what was already happening within the fleet. Using FLEETiQ we collected data to show what the problem areas were. Whilst Robert Summers Transport already had a good idea of the issues they needed to tackle, FLEETiQ provided data that gave them clarity on the figures.

FLEETiQ shows how a particular vehicle is being driven and also lets us build up a picture of driver behaviour. When you’re trying to change a whole culture it can help to start by training employees whose behaviour needs the most improvement. We could then follow that up by developing driver talks which focused on the most prevalent issues.  This meant that improvement training could be delivered in a format the drivers already knew. It meant that there was less resistance to change overall as that part of the process was already familiar.

Once we’d collected data to identify the current position, the next step was to set benchmarks for improvement.  We worked with Robert Summers Transport to help them to set key performance indicators that would enable them to monitor improvements.

By working in partnership we helped them to identify ways in which the technology could both promote and monitor behavioural improvements.

Next, we identified what proper compliance would look like in practice. This wasn’t just a theoretical exercise. It allowed us to help the company develop new policies to support their goals and to prepare proper documentation in support.

A key part of any improvement process is monitoring the progress that’s being made. We set up a monthly review to assess current performance and how these measured up against the benchmarks that had been set. We were able to recommend changes to the approach if performance levels hadn’t improved as expected. Of course, it also helped the company to reward drivers who had made good progress if they chose to.

The Board Pack on Fleet Performance

Using FLEETiQ to implement change is a significant investment for any company, so we delivered a pack to the board demonstrating improvements in overall fleet performance as a result of its use. Whilst this showed the improvements that had been made in driver performance, that wasn’t all.  Improving driver behaviour had an impact on other key areas. Better driving leads to fewer accidents and claims, but also saves money on fuel costs and maintenance over time. We put together a pack that gave the board insight into the benefits of using FLEETiQ in a wider context.

Robert Summers Transport now have a greater awareness of the consequences of poor fleet management overall and had reduced the number of accidents and resulting claims.  There was an impressive 60% reduction in the levels of speeding, whilst high level speeding had been completely eradicated.

As an added bonus, the process had brought about a four figure reduction in their fuel spend and increased their average fleet MPG from 6.5 to 7mpg.  All of these improvements came with a full audit trail that made their compliance obligations much more straightforward to achieve.

If you’d like to find out more about how FLEETiQ could transform your business, get in touch.